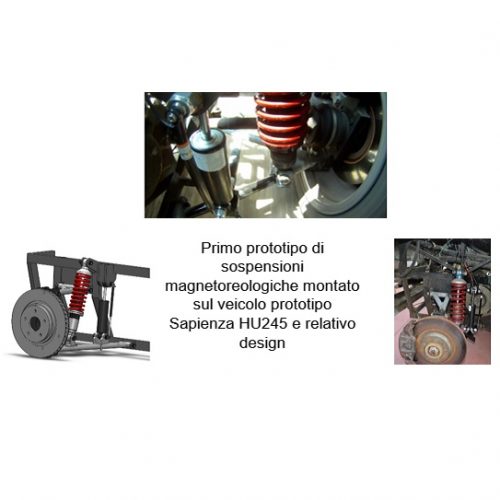 Device consisting of elastic means, such as metal components or compressed gases, energy dissipating elements, either by means of friction between a fluid and a solid, or between solid and solid, or by means of suitable electromagnetic couplings, whose damping capacity can be varied , automatically and by means of an appropriate control system, according to the operating conditions of the suspension. The control strategies are based on the calculation of variations, a special case of the Pontryagin technique that allows you to switch from an “open loop control program” to a “closed loop controller”. The developed method produces a general class of controls called VFC – Variational Feedback Control, which are generally applied to non-linear systems for vibration and noise control. The implementation of control logics and the use of controlled multi-damping systems involves the programming and implementation of control units and dedicated sensors. The invention has performances superior to those of the state of the art, with damping effects on the receiving structure. A first prototype of the invention was developed, mounted on the Sapienza HU245 prototype vehicle, which showed excellent results. Subsequently, the experimentation on the production car took place.