The object of this invention is to increase, both precision and speed during manual bracket positioning with direct bonding technique. This will be achieved by means of a software able to create and print a rigid mask (“tray”), based on a 3D scanned digital model on which a virtual positioning of the attachments will be made, which will serve as a guide to the manual position. 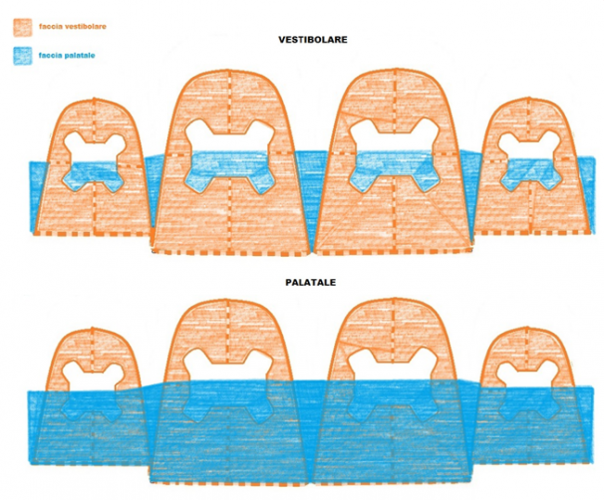 Rigid device made in printable resin, digitally designed on a 3D model, after a virtual positioning of the brackets. In case of a buccal positioning, the tray will consist of a portion that will completely cover the incisal and palatal surface, and a vestibular communicating portion that will follow the shape of each individual tooth, leaving the interproximal spaces free. Every single buccal portion will be followed by an open space (“window”) to receive the bracket, which has to cover at least half of the perimeter of the basis, leaving some room for the adhesive material excess.  In certain points of the tray (on the incisal and vestibular portion) there will also be areas of weakening, so that it can be divided into different sections, to facilitate its removal at the end of the bandage.