The system, whose acronym EL-COOL stands for “Electronic Cooling system”, operates as an improved waste heat recovery cycle. Two fluids, ideally Dimethyl Sulfoxide (DMSO) and water (the use of different mixtures is possible) are separately pumped through a heat exchanger mounted on the bottom surface of an electronic chip, where they absorb a large portion of the thermal energy released by the electronics. 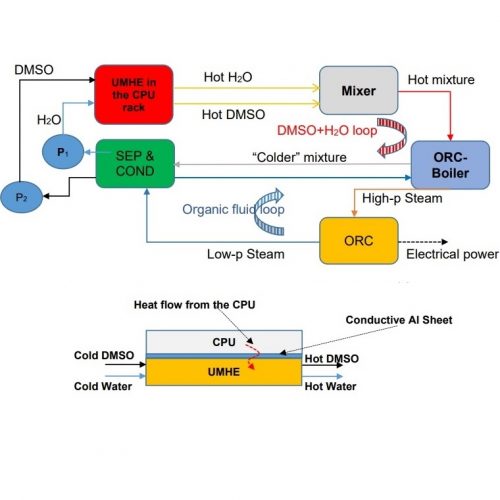 The two fluids are mixed and, due to their negative mixing enthalpy, the resulting mixture is at a higher temperature than the two individual components. The mixture is then cooled in a recovery boiler of a micro-ORC and the two fluids are finally separated by either evaporation or a membrane filtration process, to be pumped back into the chip cooling circuit. The heat exchanger and the mixer require careful design and their thermo-fluid dynamics have been studied in detail. Two different micro-heat exchanger geometries were studied / analyzed, and a number of possible high-performance geometries were developed and tested for the mixer. The performance of the ORC has been optimized in terms of power density using Camel-Pro, an in-house developed process simulator. In the known art, liquid cooling systems are used, in particular air and printed circuit board configurations, which have a plurality of ducts into which a coolant liquid is injected. Both have the drawback of energy inefficiency and complex construction / management.

Environment and Constructions - Energy and Renewables