The Tao system consists of a set of adhesive patches (tags), two controllers, two sex toys, that differ according to the sex and preferences of the user. The adhesive tags are placed on the body’s erogenous zones, which are then mapped by the controllers during intercourse. Depending on which parts of the body are touched, the sex toys vibrate more or less intensely. The system is based on the recognition of the preferred erogenous zones of the body and subsequently modulating the vibration of the Sex Toys after touching these zones. The body zones are mapped through adhesive patches (tags) divided into more or less arousing zones according to the reference colour of the tag, whereby the patches are attached to the body before intercourse. 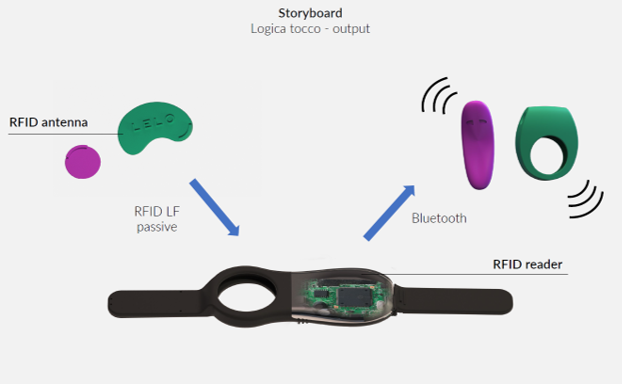 The devices contain a layer of conductive ink that acts as a passive low-frequency RFID antenna. Controllers, with an RFID reader inside, are used during intercourse to map the location of the tags. The controllers communicate with the sex toys, either a male vibrating ring or a female external clitoral stimulator, through Bluetooth technology. The controllers have been ergonomically designed to be used in a variety of ways, including as a wearable if necessary.

Compared to the methods of interaction used to date in the world of Sex Toys, the Tao system focuses on material reality, on the physical body as a means of controlling vibration, and therefore of pleasure. The trends in the market, on the other hand, are directed towards the digitalization and VR desk design of experiences related to toys.