System for training and sports competitions

A new training cone for athletes, which is able to change colour and is coupled with a robotic compact vehicle capable of moving across indoor and outdoor sport facilities. The robot, driven by an app, can position the tool for training with high precision and accuracy on the field. The cone also contains a position identification chip, so that a drone, using renown technology, recognises any unintentional movements during training and continuously manages its position and colour. The chip is also shock and weather resistant. 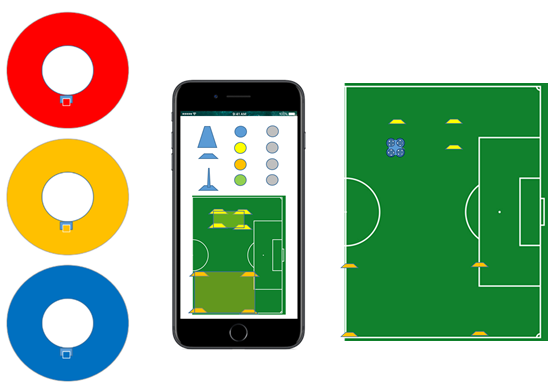 The delimiting element consists of two parts, preferably of polymeric material, of which the upper part is semitransparent. Between the two parts there is a multicolor LED connected to a battery and a position identification chip.  You can change the color of the delimiter and the position through an app that acts on individual devices or on groups of them, as well as on the drone/rover that positions the individual delimiters.  The colour can remain fixed or vary throughout the session, and can even vary cyclically or randomly according to the training utility. It can also adopt the same colour as the training surface, so as to blend in when not needed. The cone is positioned automatically by a drone. The material may have an upper part consisting of a photovoltaic panel deposited by means of spray technology combined with optical fibers, a configuration that is preferable for athletes who train outdoors and during the day. It is well known by major national, international clubs, but also by amateur clubs, that the use of training cones, allows for all four characteristics of the athlete to be trained: motor-skills, technique, tactics (decision-making strategy) and psychology. For motor-skills training, the cones must be arranged so as to respect the distances to be trained, while for technique, each cone is often associated with a technical gesture.