System and method of measurement of electrical permittivity at 0 Hz

Innovative method for measuring the static dielectric constant on materials, regardless of their state of aggregation. The method uses a commercial rotational rheometer already on the market, equipped with a DC voltage generator with current feedback. The system is also equipped with a Peltier cell, allowing the variation of the dielectric constant as a function of the temperature to be monitored. Using the same system it is also possible to obtain the polarization curves of the material being measured, also in this case in the temperature range controlled by the Peltier system. 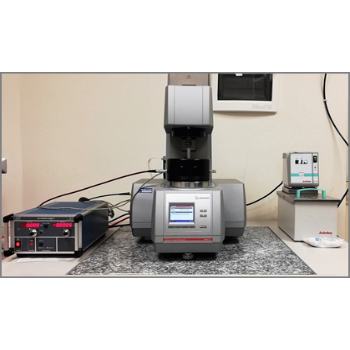 The use of a rotational rheometer, equipped with two parallel circular plates, between which it is possible to apply a DC voltage and measure the resulting attractive force acting on the upper plate, with a resolution of about 0.1 / 0.5 mN (depending on the rheometer model used) allows, once the geometric parameters of the system and the applied voltage are known, the evaluation of the relative dielectric constant of any material inserted between the plates. Using the same system it is also possible to evaluate the possible polarization hysteresis cycle, particularly useful in the case of ferroelectric materials. Furthermore, the use of a Peltier cell, below the lower plate, allows the evaluation of both the dielectric constant and the polarization cycle as a function of temperature. The device allows to obtain extremely fast measurements (a few tens of seconds, compared to tens of minutes of classical techniques). The technique has been extensively validated in laboratory measurements and being based on instrumentation already on the market, it is possible to estimate a TRL: 8.