The patent protects the first experimental demonstration of super spectral resolution spectroscopy obtained using a random laser light source.
In analogy with super-resolution stochastic microscopy techniques (Nobel Prize for Chemistry in 2014), we exploit this effect to enable a spectral characterization that exceeds the instrumental resolution of a dispersive spectrometer and is limited only by the intrinsic spectral amplitude of the laser modes. 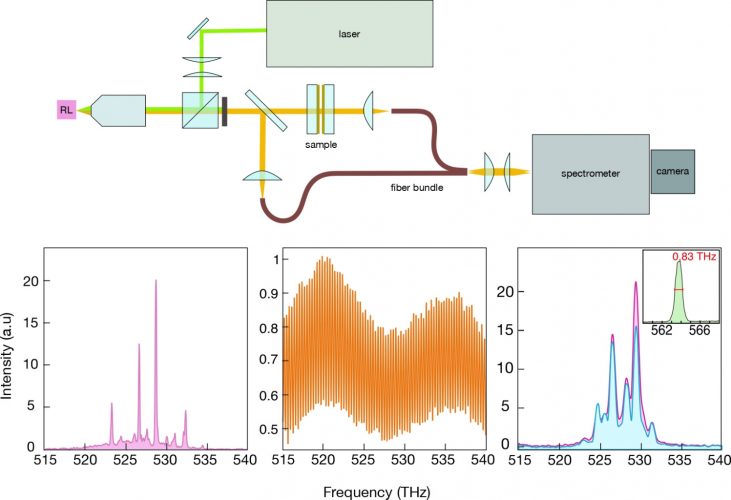 The patented technology introduces the idea of ​​scattered sampling in the frequency domain into spectroscopy, using random lasers as the light source. In this way it is possible to obtain a super resolution in the spectroscopic characterization of the analyzed samples, i.e. a finer characterization of the nominal resolution of the spectrometer. Sparse sampling allows to recover the transmission function of the target, as well as a super resolution microscopy image, using a random laser in the chaotic regime as the illumination source, which allows to obtain a few narrow, well separated from each other, with the emission spectrum of each laser pulse completely unrelated to the previous pulse. By having only a few prominent peaks for each laser spectrum, a reconstruction of the super-resolved target spectrum, free from deconvolution artifacts, becomes possible. The invention consists of an optical apparatus comprising a spectrometer and a random laser source, and a method of statistical analysis based on the stochastic central frequencies of the laser transmission modes of disordered active media. On the other hand, large intensity fluctuations between different laser modes are normalized by synchronously monitoring a fraction of the unfiltered random laser spectrum.