In vitro culture system of cerebellar granule precursor cells (granule cell progenitors, GCP) simple, reliable, easily reproducible and stable both time and with respect to the gene / biochemical expression profile of the obtained GCP cell cultures, similar to that of cultures of fresh and pure GCPs cells with respect to the possibility of freezing and thawing of the same. 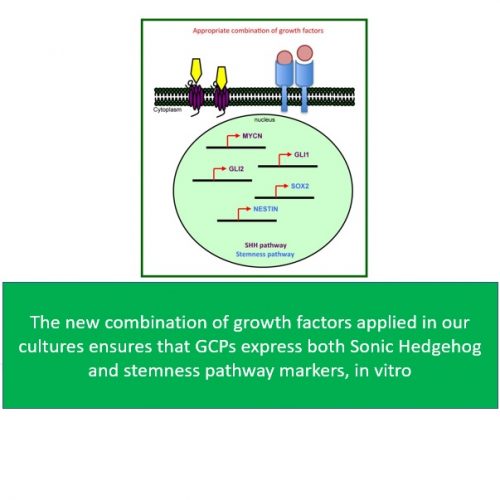 Valid in vitro model for the study of the pathophysiology of cerebellar granules, for the study of cerebellar diseases resulting from damage or neurodegeneration, and potentially for their treatment by means of gene therapy approaches. After surgical resection from mice on the 7th day of postnatal life, the cerebellum is mechanically triturated in a buffer containing HBSS, glucose and antibiotics, and the single cells thus obtained plated in a medium composed of DMEM-F12, glucose, B27 W / O VitA, insulin, NALC, heparin, antibiotics and growth factors. In this medium, the cells can be expanded and maintained for an unlimited time, after periodic dissociation of the spheres and propagation by dilution (to prevent excessive growth and consequent death from lack of nutrients and hypoxia). According to known culture models, cultured GCPs either stop proliferating rapidly, exposing the need to generate new cultures each time, or are of tumor origin and therefore cannot correctly represent the physiology of GCPs.