This invention concerns the design, synthesis, and biological evaluation of new diphenylmethane scaffold-based small molecules endowed with a dual ability to promote autophagy and increase lipid catabolism, both in in vitro and in vivo models. This new class of compounds could represent an innovative way for treatment of Neurodegenerative Diseases (NDDs), such Alzheimer’s Disease (AD). 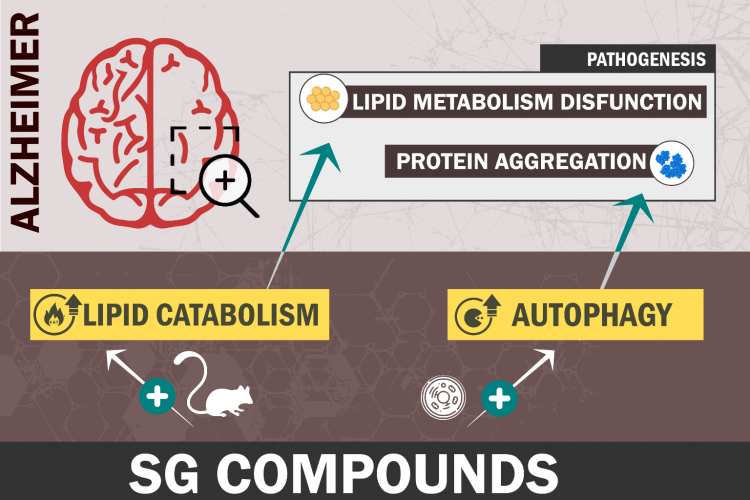 Neurodegenerative Diseases (NDDs) are characterized by a progressive loss of memory and cognition, which eventually can lead to death. This detrimental process is mainly due the deposition of aberrant proteins and modification of lipid pathways, leading to an increase of apoptotic process at the expense of autophagy. Moreover, growing evidences are confirming the existence of a strong correlation between obesity and neurodegeneration. In this scenario, promoting autophagy and lipid catabolism could lead to a substantial improvement in the clinical picture of NDDs, including Alzheimer (AD). The small molecules synthesised, namely SG-compounds, are able to promote those effects both in vitro and in vivo. Moreover, they induced an impressive lifespan improvement in a C. elegans model of AD. The experiments on C. elegans confirmed the promising results of in vitro assays, setting up further tests for preclinical validation.