The invention relates to a safety device for carrying loads handling operations, in particular by means of a crane, in order to prevent accidents caused by a limited visibility of the working area by the operator involved in handling. The invention also relates to a method for detecting collisions between load and obstacles in the working area and monitoring the oscillations of the load handled, using the device. 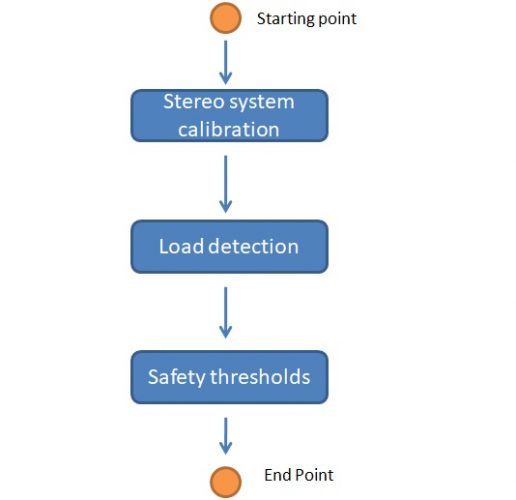 The device is used to avoid collisions between lifting equipment (cranes) in movement and objects in the environment in which they operate (buildings, vehicles, boats, other cranes, personnel, etc.). It consists of: (i) a stereoscopic system for the acquisition of a video streaming of the working area within which the load is moved, (ii) a processing unit that continuously extracts the depth maps (maps of disparity) of the working area, identifies the obstacles present, continuously determines the trajectory between the load and possible obstacles, provides the probability of collision between the load and the obstacles, depending on collision safety threshold values, and monitors the load fluctuations, comparing them with threshold values ​​of oscillations, in order to prevent risk situations.