Repositioning of epigenetic modulators to treat core symptoms of autism

Due to its prevalence and the absence of effective treatments, Autism Spectrum Disorder (ASD) represents a major clinical need. Drug repositioning has the potential to provide new therapeutic alternatives through the “new” use of “old” drugs, reducing clinical development time compared to the development of new molecules. Using this approach, the team led by Prof. Giuseppe Testa uncovered that some anti-tumoral drugs are capable of reverting the core symptoms of 7q11.23 duplication syndrome (7DupASD), a rare autistic syndrome, considered paradigmatic of the entire autistic spectrum. 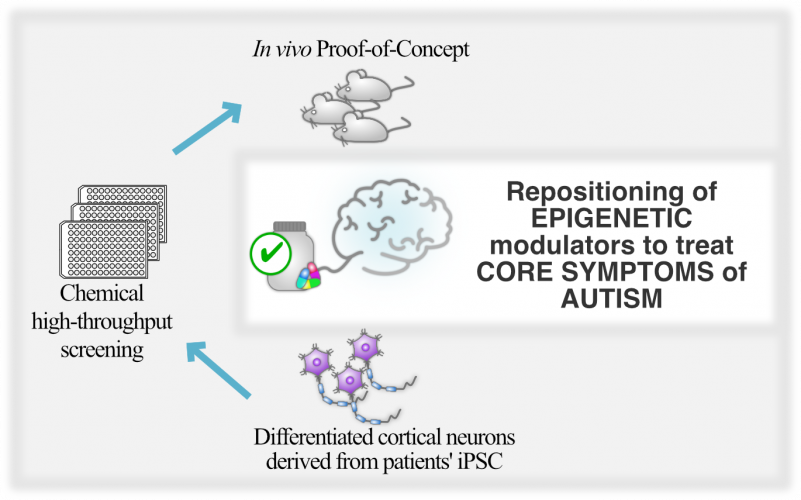 Prof. Testa’s group conducted an high-throughput drug screening of 1500 compounds, including the central nervous system compounds, epigenetic modulators and other experimental substances, on neurons of the cerebral cortex derived from reprogrammed stem cells of patients affected by 7DupASD, the so called “Disease Avatars”. Three histone deacetylase inhibitors (HDACi) have been identified that are able to reduce, at both transcriptional and protein levels, the expression of the GTF2I gene that is duplicated in 7DupASD patients and has a key pathogenetic role. HDACi are already used in various types of cancers, including brain tumors, and are considered potential treatment for neuropsychiatric disorders.

Proof-of-Concept studies are underway to test the efficacy of these inhibitors in additional in vitro models and mouse models characterized by the same genetic alterations as 7DupASD patients. The goal is to develop the first pharmacological treatment to improve the linguistic and social disabilities of 7DupASD patients and other autistic syndromes with convergent genetic alterations and pathogenetic mechanisms