The patented invention is an innovative reporter system controlled by a promoter which, exploited through in vivo imaging techniques, allows the early detection of muscle atrophy associated with pathological conditions such as tumors, diabetes and heart failure. The reporter system could be used to create models able to facilitate preclinical research, which could allow both the discovery of early biomarkers and the development of new drugs. 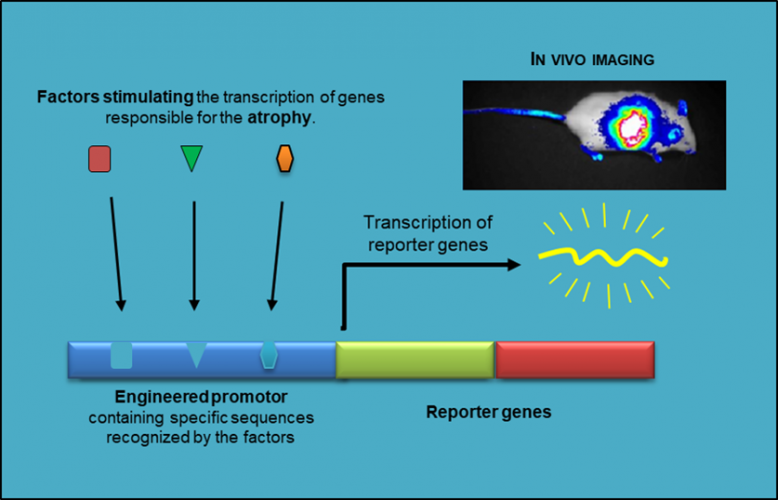 Muscle atrophy consists in the loss of skeletal muscle mass and could be associated with ageing or with a wide range of diseases including tumors, heart or lung failure and diabetes. There is no effective cure and it is only possible to slow down its progression: for this reason, it is of extremely importance the identification of predictive biomarkers that allow an early diagnosis. Research models developed up to now did not allow the early detection of atrophy as well as the distinction between pathological and physiological (eg fasting and circadian rhythm) mechanisms.

The proposed invention enables the development of in vitro and in vivo models in which it is possible the early identification of the atrophy, even when the muscle mass has not yet decreased. It is based on a system in which the transcription of two reporter genes is finely regulated by the upstream promoter. This promoter has been engineered and contains the specific sequences that, in muscle cells, are recognised by the factors which favour specifically the transcription of a series of genes involved in the onset of atrophy.