The box-type solar ovens are devices capable of cooking food and pasteurizing water with the sole use of solar radiation. General characteristics of the box geometry are the low power, which involves long cooking times, and the large footprint that makes the oven heavy and difficult to transport compared to other geometries. The main task of the present invention is the realization of a box-type solar oven that overcomes the aforementioned limits, creating a machine capable of optimizing the solar radiation and, at the same time, possessing a structure that can be easily assembled, re-closed and easy to transport, thanks to the small footprint. 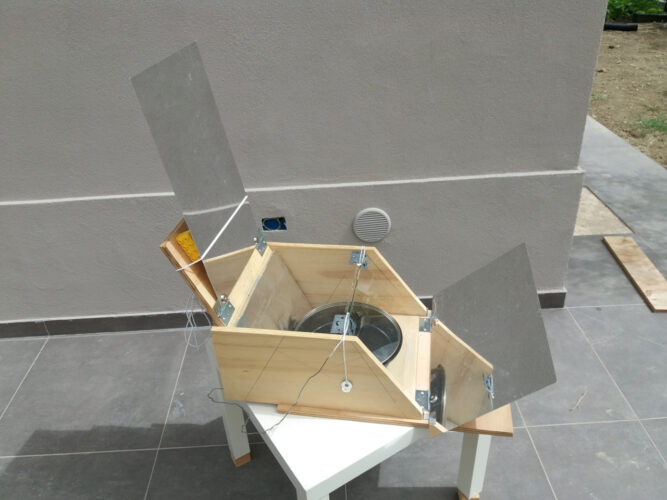 The invention is adaptable to the characteristics of the most common dishes, because the cooking chamber can be mounted in such a way as to have a variable height. The box can be completely disassembled and each of its parts can be easily stacked to be stowed or transported (closed size about 50x50x10 cm). The inclination of the mirrors is adaptable to the latitude of the place of operation and the height of the sun, with variation of the angle at will (unlike most current systems that only allow certain angles of inclination). The cooking chamber deliberately has an air vent. The oven can be made with different types of material that are easy to transpose, thus ensuring a reduced cost. Tests carried out with solar radiation of about 900 W / m2 show the possibility of reaching an internal temperature of over 130 ° C and boiling 0.5 liters of water in about 80 minutes. All these characteristics make the invention optimal for diffusion and distribution even in poor countries or in crisis areas, achieving considerable social utility. TRL 5.