The RaRe project is identified by a special crankset able to vary the length of the cranks during the revolution cycle, allowing the biker’s foot to do an elliptical trajectory and to recover, through a particular kinematic system, the radial component of the force (component that is dissipated in traditional cranksets). 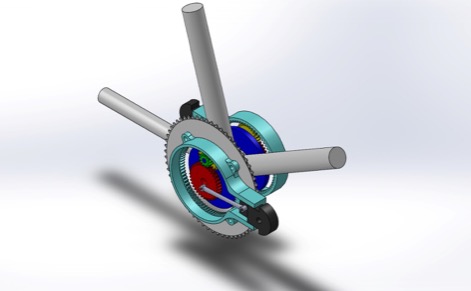 In traditional cranksets, while riding, the pedal describes a circular trajectory. Moving away from the center of rotation, the torque given by the biker is not constant since it presents two dead-centers. The pedal in the RaRe project (left figure) is bonded to the sliding part of the crack (black component), that is forced to slide into the light blue part, through gears and a conrod-crank system. The combination between the rotational and the sliding motion creates an elliptical trajectory and not circular like in traditional systems. This trajectory allows to exploit in a better way the power given by the biker, and the torque results more homogeneous, during pedaling. Other mechanisms permit to create elliptic trajectory, but they dissipate all of the kinematic system benefits. RaRe instead, thanks to the translation movement created by the meshing, uses a force component given by the biker that would be dissipated in traditional cranksets.