The invention refers to a triaxial force sensor network that can be integrated in a climbing wall, to measure the contact forces between the user and the wall. The measured data is sent in real time, via a wired or wireless connection, to a receiver (a smartphone, a PC or similar), where it is analyzed by software. 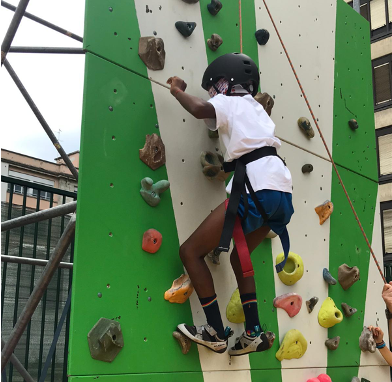 The invention is an innovative rehabilitation and training tool that was designed in collaboration with paediatric physiotherapists and occupational therapists, and its ergonomics have been optimised so that it can to be used by disabled children. It consists of a climbing frame that can host  3D force sensors on standard climbing holds that measure force correctly, in spite of the shape and size of the holds, for holds up to over 20cm in diameter. The sensors also measure with high accuracy: 80 times per second and over 100 times per second in the next version, which is under development. The data collected is made available via Wi-Fi and an App for smartphones/tablets. The data can be viewed in real time, recorded, analysed and exported. The measurements allow us to quantify the rehabilitation progress and measure even mild motor deficits. The wall is also easily reconfigurable and can be used to prepare physically and psychologically stimulating exercises and games.