The invention consists in a rotary controller with programmable mechanical resistance. The variable mechanical resistance is a characteristic of the rotary controls that determines the selection mode (discrete / continuous). Usually this resistance is predetermined and unalterable. This new solution is a knob capable of generating different selection modes through the use of an electromagnetic clutch. 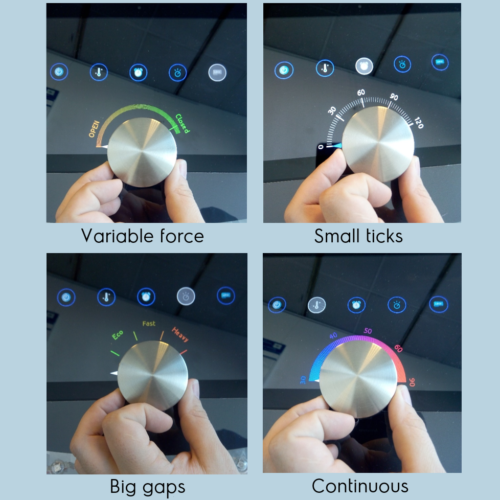 The invention consists of five main components: a fixed structure, a knob, a rotary encoder, an electromagnetic clutch that varies the coupling between the rotation axis and the fixed structure, a parametric program executed on a microcontroller that produces a signal that determines the aforementioned variation. The electromagnetic clutch system allows to counteract the force applied by the user on the knob, generating a mechanical resistance that models blocks, indentations, clicks or frictions that vary according to the programmed parameters. Unlike existing inventions, which generate contrasting force by means of motors or variable resistance by means of magnetorheological fluids, the use of the electromagnetic clutch allows to contain production costs, energy consumption, space volume occupied by the invention. The invention can be integrated into devices already present on the market within the limits of the current state of prototyping. Further software developments combined with the engineering of the device are underway, which will allow its integration on existing devices.