The procedure involves the use of a non-toxic and organoleptically inert cryogen in the process of extracting oil from olives. In addition to high yields, it guarantees the production of olive oils, especially extra virgin, enriched in cellular compounds extracted from the fruit and, in particular, in components with aromatic and antioxidant activity, with a consequent significant increase in their organoleptic and nutritional quality. The unmistakable characteristics of the oils most recognizable by the consumer are closely linked to the raw material, the type of olives processed and their production area. 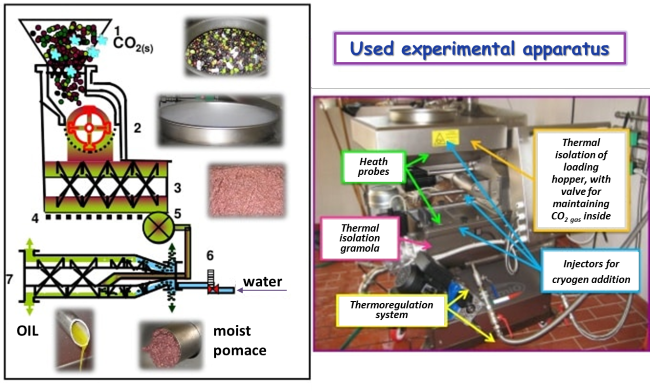 The proposed procedure provides the use of “carbonic snow”, the carbon dioxide (CO2) in a solid state for the extraction of olive oil. The solid CO2 causes the formation of ice crystals in the freezing fruit, which in turn determines the collapse of the cellular structure of the pulp. This facilitates the release of substances and their transfer into the oil, which results rich in cellular metabolites with high biological value. The gaseous CO2, being heavier than air, tends to remain above the olive paste, creating a gaseous layer able to avoid direct contact with the air oxygen and to preserve the cellular constituents from oxidative degradation. The method makes economically sustainable early harvesting of the olives: the olives less mature will be richer in water and bioactive components (polyphenols, tocopherols); then, the early harvesting limits the damage caused by attacks of Bactrocera oleae (the olive fly), one of the most feared adversities by producers of the sector, able to significantly affect both the yield and the quality of the oil produced.