Process for the Synthesis of Optoelectronic Active Metal Halide-Based Nanoparticles

Optoelectronic metal halide perovskite nanocrystals (OMH NCs) have emerged as promising materials for applications in solar cells, light emission technologies, photodetectors and lasers. The properties of light emission or absorption of these materials can be modulated by varying their composition. However, when OMH NCs of different compositions are deposited together on solid films or mixed together in a colloidal suspension, for example with the scope of combining together different emission colours and obtain white emission, these undergo rapid halide exchange, such that all structures present end-up being of the same composition and emitting a single colour dictated by the relative abundance of the various halide ions present in the sample. Such colour instability limits the use of OMH NCs as multicolour emitters in displays. Furthermore, these OMH NCs have poor stability against moisture, polar solvents, and long-time exposure to high flux irradiation. All these agents cause a quick degradation of the optoelectronic properties of the OMH NCs. 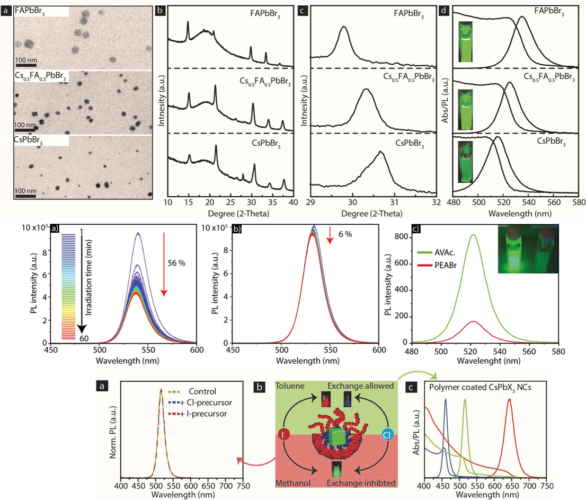 The inventors observed that by adding additive molecules (succinic acid, γ-aminobutyric acid, 5-aminovaleric acid, etc.) to the standard encapsulation method, increased the stability of the OMH NCs, even with the use of protective block copolymers of relatively simple structure. Thus, the resulting OMH NCs have a core made of the metallic halide covered with an organic coating formed by the additive molecule(s) and the block copolymers. The process involves i) preparing a precursor solution using a solvent, halide salts of one or more cations intended for forming the nanocrystals (Fˉ, Clˉ, Brˉ and Iˉ) and a block copolymer; ii) adding the precursor solution dropwise to a selective non-polar or moderately polar solvent, to form a suspension, allowing the system to react and form optoelectronic metal halide nanoparticles, until the obtained suspension changes colour; iii) adding a quenching solution to halt the reaction and iv) collecting the optoelectronic metal halide nanoparticles.