The proposed method consists in an algorithm and a set of electronic devices which give to a hybrid or electric vehicle the ability to learn and predict the driving habits of the driver. On the basis of past observations and current driving data, this method is able to predict how much energy the vehicle will use until the next recharge, so that a specific energy-utilisation strategy can be put in place. 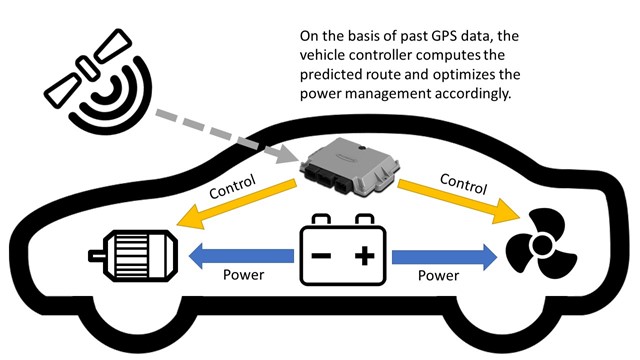 The proposed method makes use of a GPS receiver and an electronic embedded device, on which the algorithm can run, mounted on the vehicle and connected to the vehicle network. By using only information about vehicle status (driving, stopping, recharging), energy consumption and GPS position, the proposed algorithm builds a graph of historical routes between two consecutive recharges.

The consumption data relative to each route is also stored in the graph. During a new driving cycle, the existing graph is explored in an efficient way to perform statistical inference and to produce in output, by recognising habitual routes, the expected energy consumption until the next recharge, including relative confidence. The whole method is designed in order to be suitable for execution on resource constrained devices, thus not requiring a reliable connection to a cloud backend.