The present invention refers to the identification of a novel cell population of human lymphoid progenitors characterized by the expression of markers such as CD34, DNAM-1(CD226) and CXCR4, to the method for their identification and to the uses in the therapeutic and diagnostic field. The percentage of the aforementioned population in the peripheral blood correlates with the chronic inflammation. 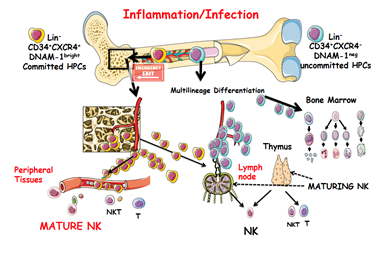 CD34+DNAM-1bright CXCR4+ cell population occurs in the peripheral blood of patients affected by acute and chronic inflammation in percentages ranging from 1 to 20% while it is absent in the peripheral blood of healthy subjects or in general without chronic inflammatory pathology as well as in the umbilical cord blood. In flowcytometric analysis, the population in question is characterized by the simultaneous expression on the surface of the following markers: