Described is a new extraction process to obtain a mixture of active ingredients from pomegranate seeds that can be made at lower temperatures than known processes, avoiding the denaturation of the active ingredients contained therein, thus allowing its use in the treatment and / or prevention of obesity and associated pathologies, such as in particular insulin resistance and type 2 diabetes and hepatic steatosis. 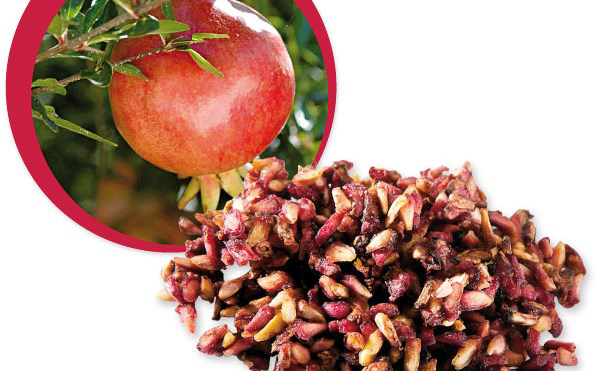 Ethanolic extract from pomegranate seeds that has a complex of conjugated fatty acids (punicic acid, elaidinic acid and eleostearic acid; the characterisation of the lipid fraction is shown in the table), of polyphenol substances and tocopherols, whose action has been tested on human adipocytes in culture, showing an anti-inflammatory effect and an increase in insulin sensitivity on human adipocytes (potential anti-inflammatory and anti-diabetic effect).

The compound was also tested in the response of hepatocytes to the accumulation of lipids, revealing that the compound extracted from pomegranate seeds is able to significantly reduce the accumulation of lipids both through the reduction of lipid synthesis and by increasing their catabolism. The method uses an organic solvent (i.e. ethanol), at a working temperature between 20°C and 40°C, most effectively at 25°C (other actual methods work at temperatures over 80°C).