Photovoltaic solar generator equipped with special transparent “mini-modules” capable of increasing the maximum percentage of increase in the generation of electricity from the sun, compared to the same generator without a solar tracker. 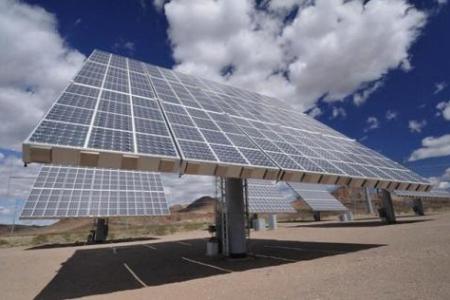 The photovoltaic generator is characterized by some features that make it completely innovative compared to the generators of the same category already developed.

Unlike conventional photovoltaic modules, each of the mini-modules of the invention is not equipped with metal frames or cover glass, since a single glass is provided for the transparent cover that houses the plurality of mini-modules that make up the photovoltaic generator.

Furthermore, while conventional solar tracking generators are obtained by installing normal photovoltaic modules on additional systems responsible for handling them, resulting in systems that are overall very heavy, bulky and fully exposed to disturbing atmospheric agents, the mini-modules and all the other components used for solar tracking according to the invention are installed within a transparent cover, resulting completely protected from disturbing atmospheric agents.

At the end, the degree of semitransparency to sunlight can be adjusted in a coordinated manner with the adjustment of the max angle of rotation of the photovoltaic cells and, therefore, of the maximum percentage increase in energy generation electricity from the sun, compared to the same generator without a solar tracker.