Pharmacologically active peptide compound, process for the preparation and use therefore

The invention is a natural originated peptide  compound NHK1 able to counter mitochondrial dysfunction of motor neurons affected by ALS. The NHK1 peptide acts by inhibiting the accumulation on the mitochondrial VDAC channel of clusters of misfolded pathological proteins, typical of neurodegenerative pathologies, and thus recovers the vitality of neurons affected by the disease. 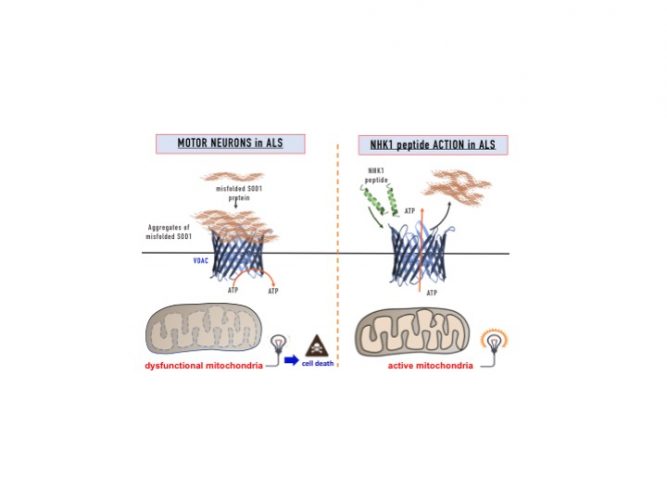 VDAC channel protein covers the surface of the mitochondria playing a fundamental role for its physiology: it allows the passage of all metabolites and ATP. In healthy cells, the functionality of the VDAC is modulated by molecules with which it physiologically interacts (e.g. hexokinase). Pathological proteins characteristic of degenerative diseases (such as SOD mutated in ALS) tend to accumulate on the VDAC and prevent normal interactions of it. In in vitro and cell models, the NHK1 peptide has proven effective in preventing the interaction between these molecules and the VDAC, thus recovering the mitochondrial functionality and therefore the vitality of the neurons affected by the pathology.

Most neurodegenerative diseases (Alzheimer, Parkinson, SLA, etc.) are united by the presence in the neurons affected by the disease of misfolded peptides / proteins and non-functional mitochondria.