Recentrly, specific attention has been paid to the biological control of fire blight using with bacteriophage. The invention claims the use of a bacteriophage to reduce the frequency of the infections caused by the Erwinia amylovora (Ea). The EA is one of the most serious infectious diseases affecting Apple, Pear and other tree plants such as Quince, Medlar, Loquat, along with shrubs such as Cotoneaster and Pyracantha. 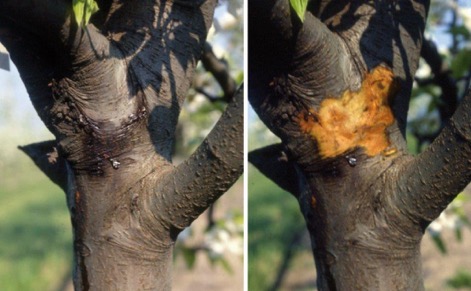 The invention foresees the use of the phage M9, lytic for Erwinia amylovora(Ea) (primary target), selected for its ability to cause lysis in 29 Ea strains typical of Northern Italy and to be propagated in laboratory on a strain of Pantoea vagans, a saprophytic, non-pathogenic enterobacterium (secondary target), which commonly cohabits as epiphyte in the same niche of the pathogen Ea. Consequently, the lytic M9 phages, distributed well in advance on Apple and Pear trees, are able to persist indefinitely at the expense of the secondary target populations and may already be present on the host plant at the moment of immigration of Ea cells.