The Optical Pressure Sensor (OPS) is based on the phenomenon of the Rayleigh scattering. Unlike classical pressure sensors, that exploit the deformation of a mechanical part of the same, the OPS «counts» the photons scattered by the molecules of the gas, thus measuring the density of the gas. This information, along with the knowledge of the temperature and the nature of the gas, allows to accurately measure the pressure of the gas. 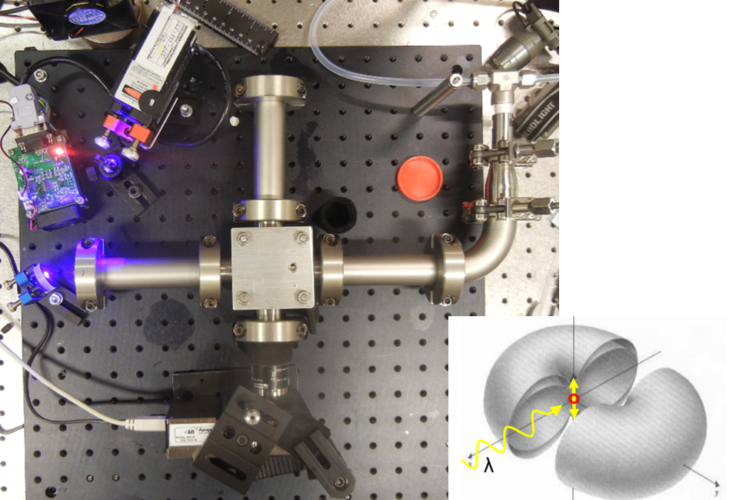 Classical pressure sensors are based on the measurement of the deformation of a mechanical structure (a membrane). This leads to a trade-off between the sensitivity and the maximum range, eventually limiting the dynamic of the sensor. Typical sensors have at best a dynamic range of 10^5 meaning that different sensors for different ranges are needed. Furthermore, membranes are prone to mechanical drifts and hysteresis requiring frequent calibration. The OPS overcomes this limits since is based on the optical interaction between the light and the gas. The dynamic range exceeds 10^6 has no drifts and no hysteresis.

The OPS has a simple structure made of a laser, a measurement chamber, a photodetector and a temperature sensor. The laser beam interacts with the gas; each molecule of the gas emits photons according to the Rayleigh formula; the photons are focused on the photodetector and converted into a digital value proportional to the density of the gas that in turn is converted into pressure by knowing the temperature of the gas.