The invention refers to a new rapid, inexpensive and efficient technique capable of accurately identifying physiological conditions associated with osteoporosis; the technique can be easily applied to routine blood tests, for a systematic mass screening, not linked to gender differences.

According to data from the World Health Organization, osteoporosis affects about 75 million people in the United States, Europe and Japan and by 2025 more than 3 million osteoporosis-related fractures are expected each year, for an annual cost around 25 billion dollars. To date, several methods have been developed to diagnose the disease and describe its progression. These techniques, generally grouped under the name of computerized bone mineralometry (CBM), although effective, are expensive, require long execution times, are recommended starting from 65 years and some of them expose the patient to ionizing radiations. Such techniques cannot be used for mass screening of the population. 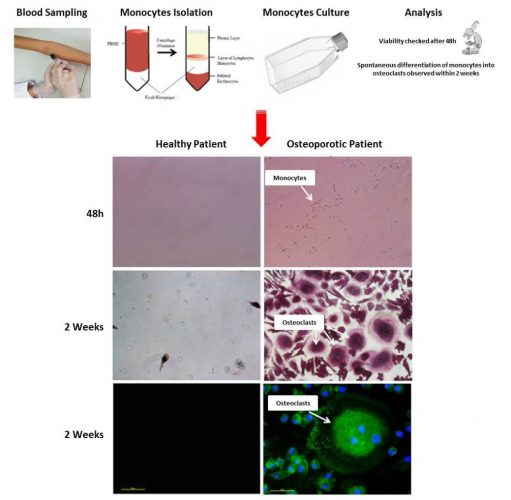 The new method is based on the spontaneous osteoclastic differentiation ability of circulating monocitary populations, purified from patients with pathological conditions associated with osteoporosis, even at an early stage. The method is an easy, fast, harmless, non-invasive and economic diagnostic test that requires only 1 ml of blood to be performed, therefore it can be adopted as a routine screening test by any clinical analysis laboratory as it is compatible with the normal activities of blood analysis.

The new test is able to diagnose the presence of an altered bone remodeling caused by osteoporosis, even before the traditional diagnostic methods are used, according to specific guideline, or they highlight the signs. This technology is complementary with those already existing, as it may precede standard diagnostic tests, upstream discerning patients who need more in-depth investigations. Furthermore, by early detecting the presence of a pathological condition associated with bone resorption, the new diagnostic technique allows to intervene on patients who have osteoporotic manifestations at an early stage, promptly slowing the progression of the disease. Reduction of osteoporosis progression since its beginning means preventing and/or limiting associated complications, such as fractures, deformities, chronic pain and impaired balance, and, for this reason, early diagnosis of osteoporosis will have in the near future a significant social and economic impact.