It is a doping method in which the dopant precursor is in liquid form and the material to be doped is immersed in the solution. The molecule containing the dopant is deposited on the surface of the material forming a self-assembled monolayer, that is, ordered and compact. With a subsequent heat treatment, the molecule decomposes and the dopant diffuses. 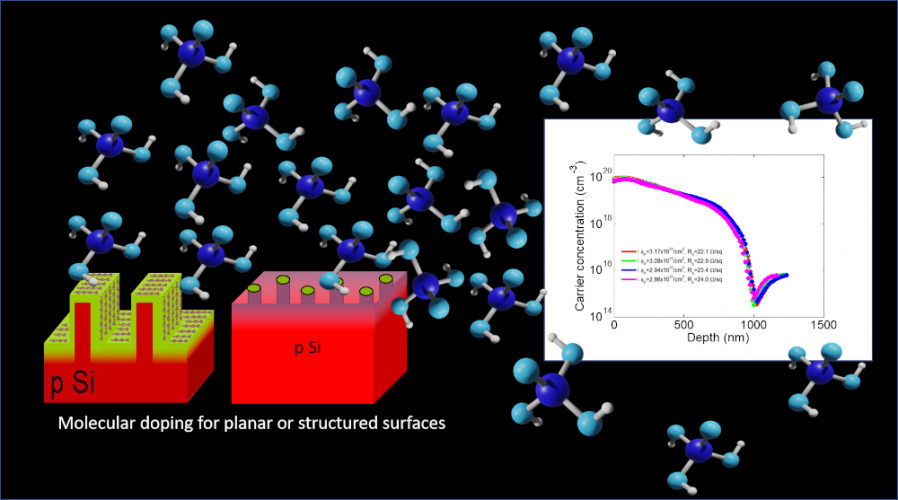 In the transition from planar devices to nonplanar architectures, the controlled doping at the nanoscale is becoming more challenging, because standard doping methods present numerous severe limitations (as inability to achieve abruptness down to the nm range, absence or difficult conformality, stochastic spatial distribution of the implanted ion, severe crystal damage, usage of expensive and dangerous materials or equipment, formation of contaminants, etc.).
The patent relates to an innovative doping for semiconductors, based on the use of liquid solutions as precursors of the dopant, which are deposited on the material forming a self-ordered monolayer that conforms to the surfaces, whether they are planar or structured. So far, molecular doping (MD) has been used with precursors of organic molecules, which also release the carbon in the semiconductor, which deteriorates its efficiency (by acting as a trap for charge carriers).

In the present invention, the use of phosphoric and boric acid as precursors of the dopant has been proposed for the first time. They do not contain carbon and have a smaller steric footprint than previous organic molecules, thus allowing a much higher predetermined surface density. Our method id repeatable and the doses of the active carriers are of the order of 1015 cm-2.

All the applications where the use of doped semiconductors and metallurgical junctions is necessary: