The structure is a modular and joinable solution for the settlement of marine organisms and for the coasts protection, composed of multiple floors in variously inclined concrete capable of triggering colonization processes by desired marine organisms, both plants and animals, as well as to allow the installation of environmental sensors and the creation of integrated networks. The appropriate arrangement along the coasts can mitigate the waves erosive effect and reduce the offshore transport of sediments.In addition, the sequence of modules is very suitable to allowing the exploration of the artificial structures useful for the training and the teaching of sports and scientific divers. 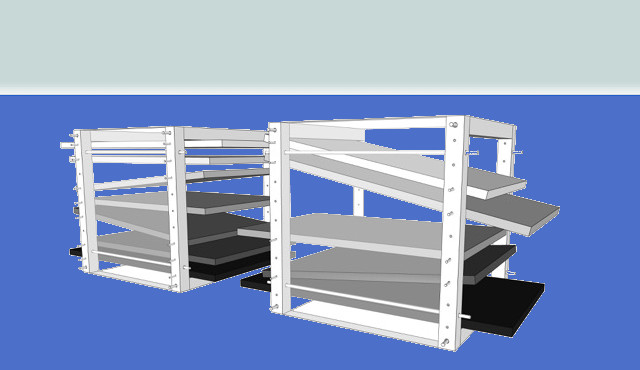 In a cubic-shaped structural frame, an exoskeleton, basically square or rectangular shelves can be inserted, anchored in numerous different positions and inclinations, using a system of pins and slots. Each exoskeleton can be placed on the seabed resting on any of its six faces or placed on other similar structures to form a barrier that can also develop vertically. According to requirements, the side faces of the cubic frame can be blinded by panels of the same nature and characteristics as the shelves, and anchored in a similar way. On the shelves and on each component of the structure, holes, protrusions, grooves and other devices can be applied, during production or subsequently, to improve rooting and foster colonization by the selected marine organisms (whatever they are, whether vegetable than animal). However, the use of natural materials, of mineral or organic origin, such as scraps of shells, glass scraps, pebbles, sand, is envisaged.