MIRNA FOR TREATMENT AND IN VITRO DIAGNOSIS OF DRUG RESISTANT CANCER 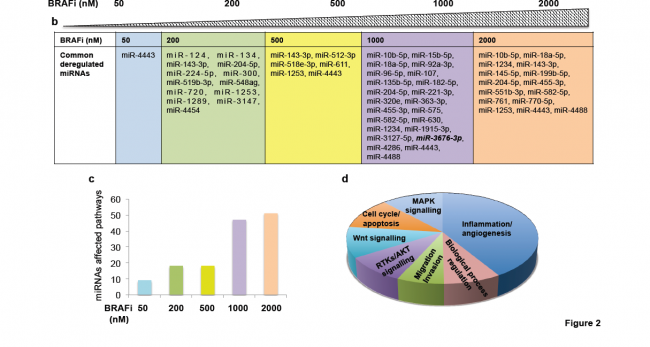 The method may include the measurement of different miRNA combinations in liquid biological samples such as blood, serum, plasma and urine for the diagnosis of in vitro resistance in tumors to drugs that inhibit the BRAF/MEK pathway. This phenomenon can, in fact, stimulate or inhibit the expression of specific miRNAs. Therefore the affected tumors are characterized by mutation in the BRAF kinase such as: melanoma, colorectal carcinoma, papillary thyroid carcinoma, non-small cell lung cancer, brain tumors, non-Hodgkin’s lymphoma. According to the present invention, the method may comprise measuring the expression of the following miRNA combinations: miR-199b-5p and miR-4488; miR-199b-5p and miR-4443; miR-4488 and miR-4443; miR-199b-5p, miR-4443 and miR-4488; miR-199b-5p and miR-204-5p. These molecules can be carried by lipid nanoparticles since the use of naked RNA-based molecules in therapy is hampered by their rapid enzymatic degradation in biological fluids.