Gliomas account for almost 50% of all brain tumors in adults. Patients who usually undergo surgery to remove the glioma from the brain, followed by chemotherapy and radiation therapy, have survival rates of less than 20 months. Polymeric implants, such as Gliadel®, have been proposed for localized chemotherapy, which are implanted directly into the surgical site and release their therapeutic content locally, in order to removal any residual tumour cells. However, only slight improvements in patient survival rates have been achieved, due to the short release time (about 2 weeks) and the shallow penetration of the therapeutic molecules in the brain tissue. This method, also appears to be beneficial in patients with newly diagnosed glioma, but not for those with recurrent glioma, with possible toxic effects. The present invention aim is to provide a localized drug delivery system proven to be effective in overcoming current therapeutic obstacles. 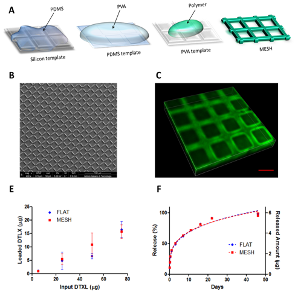 microMESH is a biodegradable, implantable device for the localized delivery of a wide variety of therapeutic agents, possibly incorporated in nanoparticles. The device is a grid shaped polymer matrix constituted of micrometric meshes, containing one (or more) biocompatible polymers and one (or more active) ingredients. A wide array of active molecules can be loaded onto the mesh, including and not limited to, anti-tumour agents, protease inhibitors, biomolecules (RNA, antibodies, peptides), nanoparticles carrying active ingredients, quantum dots, encapsulate anti-bacterial, anti-viral and anti-fungal agents. The thickness of the polymer matrix is preferably of 3 to 10 pm, being square in shape (this is customisable according to end-use), with the distance between the adjacent apertures being in the range of 3 to 10 pm. microMESH is easily fabricated using a silicon template (wafer) having the negative of the general grid shape of the microMESH device etched on a face and the appropriate polymer matrix. Once implanted, the meshes micrometric pore size facilitates on-site tissue cell growth and proliferation.