Marker in patients with glioblastoma responder to Regorafenib

The present invention relates to the application of a marker to allow the analysis of patients with glioblastoma which can respond positively to the angiogenic drug Regorafenib.

The inventors observed that tumor samples in which the phosphorylated form of the serine is expressed in position 79 of the enzyme acetyl-CoA carboxylase (pACCSer79) examined a patient who experienced a longer reaction after second-line treatment with Regorafenib reviews of a randomized, controlled and phase II clinical study conducted by the Veneto Oncological Institute IOV – IRCCS and registered REGOMA 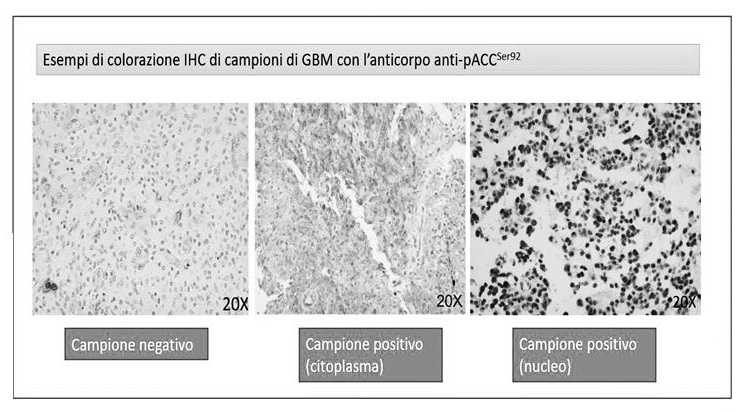 Pharmacological inhibitors of angiogenesis cause indirect effects on tumors associated with the reduction of tumor vascularity which is associated with increased hypoxia and reduced availability of nutrients for cancer cells. GBM is a grade IV astrocytoma according to the WHO classification and represents the most frequent form (12-15% of cases) among adult intracranial neoplasms. GBM remains a poor prognosis neoplasm that invariably relapses with still very limited second-line therapeutic options. Regorafenib potentially affects tumors through various pathways (angiogenesis, oncogenesis, stromagenesis) through the inhibition of numerous receptors with tyrosine kinase (RTK) activity active at the vascular level (VEGFR1-3, TIE2, FGFR), the stroma (PDGF, FGFR ), and cancer cells (KIT, RET). Among the mechanisms inhibited by the drug downstream of these RTKs is the RAS / BRAF pathway, and one of the direct effects that the drug has in vitro on the tumor cells that depend on these pathways is an arrest of cell proliferation and induction apoptosis. The effects on the vascular and stroma are observed in vivo through a reduction in the density of the microvessels and a slowdown in tumor growth attributed to the decreased availability of oxygen and nutrients, such as glucose, to support the proliferation of cancer cells. The anti-tumor activity of Regorafenib has been demonstrated by numerous preclinical studies