Liposomes for Treatment of Cardiac Arrest

Classical emergency treatments in cardiopulmonary resuscitation contemplate repeated injections of adrenaline, which induce substantial neurological risks associated to overexposure and dose fluctuations of the drug. This invention is aimed to reduce such critical side effects, and consists in adrenaline-encapsulated liposomes able to keep the required therapeutic dose constant for longer time. 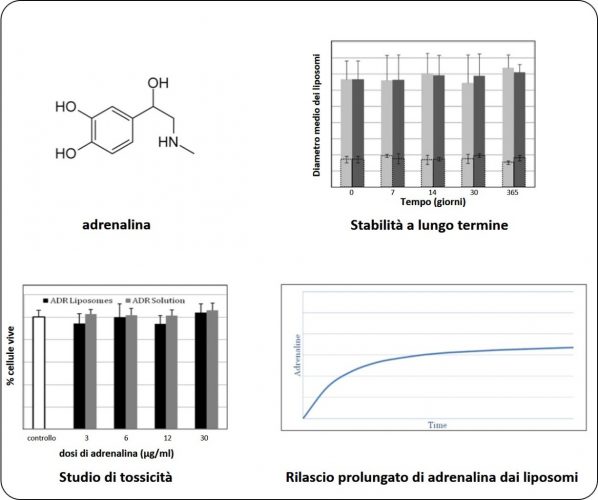 The use of adrenaline in treatment of cardiopulmonary resuscitation is fundamental since it is capable of stimulating myocardial contraction and resumption of the heartbeat. However, especially in case of multiple injections (as prescribed by guidelines for cardiopulmonary resuscitation), its non-selective action exacerbates the ischaemia after the return of spontaneous circulation and increases the risk of neurological damage. This invention consists in phospholipid-based liposomes loaded with adrenaline by a pH driven remote loading and shielded by polyethylene glycols from interactions with plasma proteins. Such a formulation is engineered to be used as an injectable liquid solution for parenteral administration during cardiac emergencies. This formulation enables a controlled release of adrenalin in the body, thus reducing the number of administrations, the cumulative dose and, accordingly, the side effects.

All the clinical applications where cardiopulmonary resuscitation is required e.g. cardiac emergencies of various types: