The invention concerns peptides derived from bovine Lactoferrin (bLf), in particular from the C-lobe of of bLf, that have a powerful broad-spectrum anti-influenza activity. The three identified peptides are able to block both hemoagglutination due to the virus and cell infection. The anti-influenza activity is due to their interaction with the hemagglutinin, a glycoprotein expressed on the viral surface. 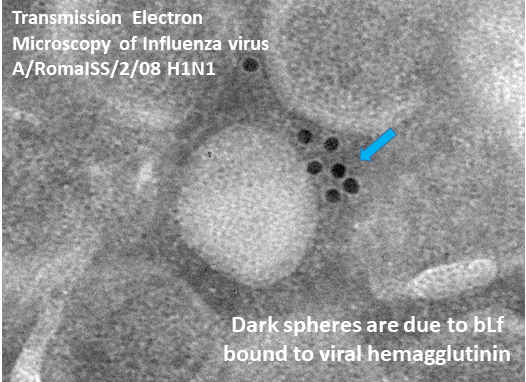 A computational study made it possible to identify the bovine lactoferrin sequences that mediate the interaction with hemagglutinin (HA). It was then shown that these peptides are able to bind viral hemagglutinin blocking both functions performed by this protein: the initial binding of the virion and its entry into the host cell. The high efficacy of these peptides, in the order of the picomolar, also manifests themselves in a broad spectrum, concerning phylogenetically distant viral strains (H1 and H3). They also bind HA in a conserved region that is poorly subject to mutations, reducing the risk of resistance. All these characteristics make these peptides valuable tools in the fight against influenza, where today the few drugs available quickly cause the emergence of resistant strains, or are not readily usable like vaccines. Although the in vivo activity has not yet occurred, the biological and chemical characterization of these peptides, and their derivatives, continues with good results.