The invention describes the synthesis and uses of a novel peptide (SIMBA2, Synthetic Interfering Mini Beta-Arrestin 2) for the prevention and treatment of Central Nervous System diseases, such as Alzheimer’s Disease. SIMBA2 prevents “synaptopathy” by interfering, with exceptional specificity, with JNK3 signaling and blocking synaptic dysfunction and consecutive neuronal death. 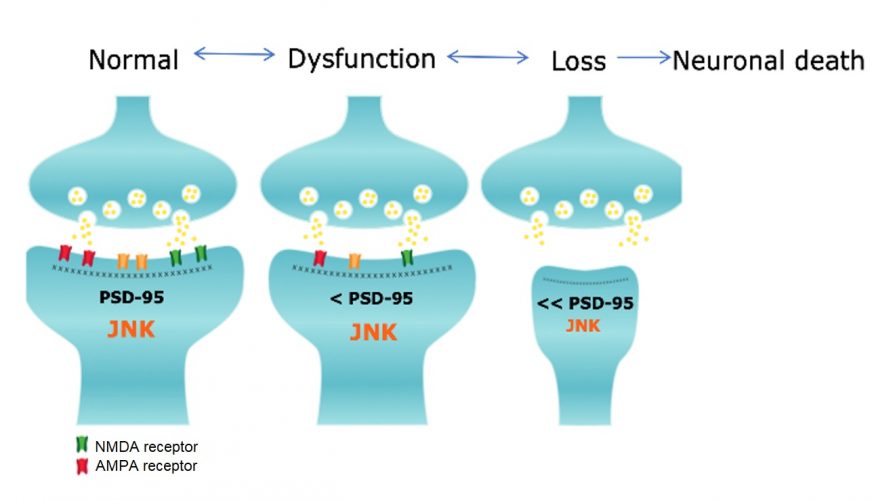 Many CNS diseases, such as neurodegenerative or psychiatric diseases, are characterized by dysfunction of excitatory synapses, called “synaptopathy”, which in general is the first toxic event during pathogenesis. The most studied synaptopathy is the one characterizing Alzheimer’s Disease (AD); it is strongly correlated to cognitive decline and it is an early event that precedes neuronal death. A therapeutical approach aimed at reducing or preventing the synaptopathy might be promising, but it is still missing at present. Isoform 3 of c-Jun N-terminal Kinase (JNK3) has a pivotal role in synaptic dysfunction and is selectively expressed in the central nervous system, thus it is an ideal target.

For these reasons, we developed a JNK3-inhibiting peptide (SIMBA2) that was identified through computational methods. The peptide competes for the binding of JNK3 with β-arrestin2, a specific interactor of JNK isoform 3, achieving an exceptional specificity. The in vivo treatment in an AD model with SIMBA2 prevents synaptopathy and ameliorates the synaptic functionality without evident side effects. SIMBA2 also displays higher efficiency and specificity compared to the previously known JNK3-inhibitor D-JNKI1. Finally, since SIMBA2 acts on an early event during neurodegenerative processes, it could be employed for several diseases.