The invention relates to membranes containing polymerised ionic liquids for use in gas separation, as well as to a process for their production. More specifically, the technology consists of innovative synthetic membranes based on polymerised phosphonium-based ionic liquids which were found to be particularly suitable for carbon dioxide separation, also in a high humid environment. This technology finds application in the context of circular economy and waste streams recovery. 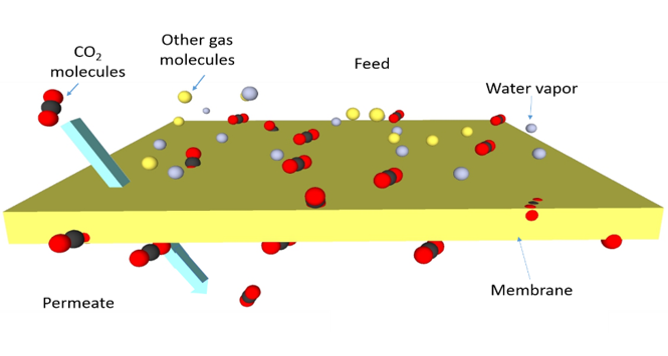 Membranes were prepared through the photo-polymerization of a mixtures containing acrylates and 3 different ionic liquids (ILs) with different alkyl chain lenght (from ethyl to octyl): Ethyl3P+, Butyl3P+ and Octyl3P+. The permeability of all the investigated gases decreases with the IL chain length increase. The Ethyl3P+ has thus the higher permeability, which is more than three times greater than Octyl3P+. However, the Octyl3P+ shows the higher selectivity with respect to the other membranes. The membranes result to be selective toward CO2 and this can be mainly attributed to the presence of ILs which promotes the solubility of CO2, preferentially favouring its permeability, with respect to the other gases for which the transport is mainly determined by diffusivity. Mild operation conditions required, reduced volumes, modularity, the absence of adsorbing chemicals and easy scalability are among the main advantages which make membrane technology competitive in comparison to traditional ones such as adsorption, cryogenics etc.