The system enables to instruct network devices on the actions (e.g., re-routing or transmission parameter adaptation) to perform upon failure or degradations without querying a centralized controller. This way, the recovery of services is guaranteed in a much faster way. The system, which is fully compliant with SDN paradigm, is suitable for use cases such as system margin reduction, white boxes, and OAM (operation administration & maintenance) and it is compatible with emerging control technologies as NETCONF, RESTCONF, and YANG. 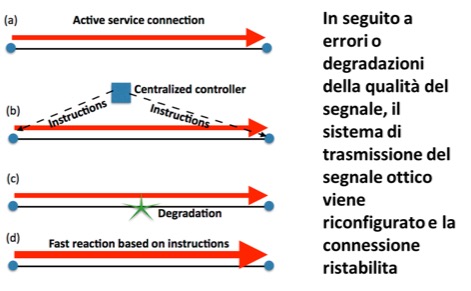 The proposed system is based on a remote controller, two novel YANG Models, a controller data plane device to extend and increase the level of programmability of networks. According to the network state, bandwidth availability, established connections when events occurs, actions have to be taken on data plane devices. The centralized controller sends a message that enables the remote controller to instruct the device controller about critical events and actions to be taken. Thus, the system provides the possibility to configure on the device a finite state machine (FSM) through YANG and any configuration protocol supporting YANG (e.g. NETCONF, REST). Finally an acknowledgement message is sent to the remote controller notifying that the operation has been concluded. A relevant part of this new system relies on the YANG for events and finite state machine.