Identification of specific antibodies against the Polioma BK virus

The present invention consists of an analysis method for identifying the presence of antibodies against the polioma virus BK (BKPyV) in samples of human biological fluids, by using synthetic peptides with the immunological method E.L.I.S.A. indirect. The proposed solution, compared to the immunological analyzes currently available on the market, allows to drastically reduce false positives, not being limited by cross-reactivity with other homologous polioma viruses. 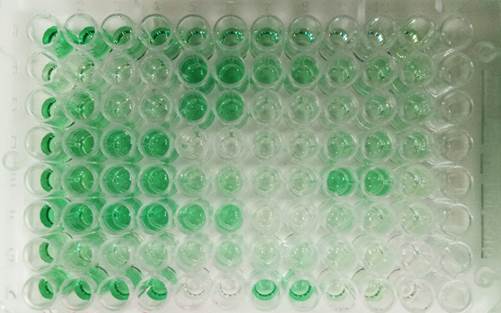 The invention consists of a standardized, specific, sensitive, rapid, and low-cost method of analysis, which allows the unequivocal identification of the presence of antibodies against the BK polyomavirus (BKPyV) in the sera of subjects suspected of being infected with BKPyV , or in the sera of healthy subjects donating blood, stem cells or organs, or even in sera of patients suffering from different pathologies associated to BKPyV, such as neoplasms and some neurological and kidney pathologies. The method uses short unique peptide sequences of BKPyV, representing BKPyV specific epitopes, which are immunological targets for the antibodies present in sera and other human fluids. The synthetic peptides used in indirect ELISAs were synthesized using standard techniques and equipments.