The invention aims to solve the typical problems that affect the entrapment of marine sediments in deep waters. Typically, sediment traps must remain vertical in the water to work properly. On the contrary, the proposed trap has been developed to remain horizontal with a side entrance and exit, and a central sedimentation tank. 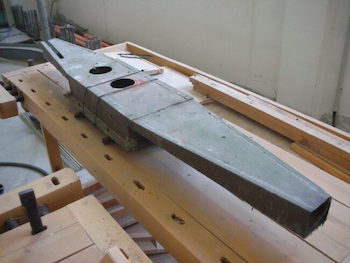 The trap is horizontal with two openings, front, and rear, which allow the horizontal sea current to enter and exit respectively; inside the trap, the sediments fall. The input and output channels are equal and symmetrical. In a central position, between the two channels, the trapping tank is present. In this tank, due to the enlargement of the cross-section, the current velocity reduces, allowing the transported sediments to fall. Furthermore, the proposed mooring system guarantees the horizontality of the trap even in the presence of strong currents, when, on the contrary, in the old vertical traps, an inclination of the mooring cable is always present with consequent problems of sediment entrapment. Furthermore, the proposed trap rotates according to the direction of the sea current flow, always directing the inlet to the sea current.