The invention consists of a flexible joint with high accuracy, which allows the parts it connects to rotate with respect to one another. The joint is composed of two flexible elements with initial curvature, whose position and orientation depends on the position of their centroids. Such characteristics ensure remarkable accuracy maintaining unchanged the typical advantages of compliant mechanisms. 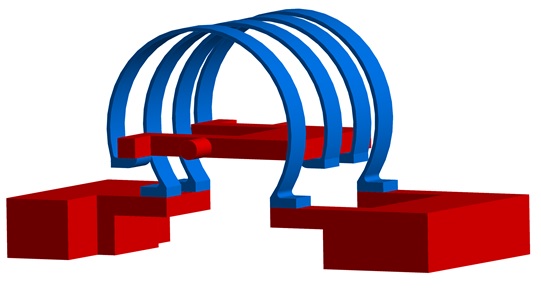 In the last years, the Cross-Axis Flexural Pivot has attracted considerable interest because of its advantages with respect to traditional revolute joints. However, its implementation determines a reduced accuracy with respect to its rigid-body counterparts. In its most utilised configuration, the Cross-Axis consists of two rectilinear beams with equal length, overlapped and crossed in their mid-point. At their end-sections, the beams are connected to two rigid platforms. Undergoing the deflections, the two beams allow the rigid bases to rotate with respect to each other. Such configuration has been revised by introducing initially-curved beams positioned in such a way that their centroids are coincident. As a result, the so-called Curved Cross-Axis Flexural Pivot (TRL 3 – Proof-of-Concept Demonstrated) presents all the advantages of the straight Cross-Axis Flexural Pivot, together with a position accuracy significantly increased, closer to the one of traditional revolute joints.