Fluid filtering device based on a rotating valve pressure exchanger 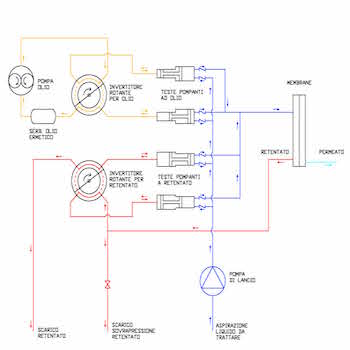 During ENEA’s research in absorption refrigeration machines, have been patented several reciprocating pumping systems based on oil gear pumps coupled with an original self-adjusting rotating valve. Such a coupling, instead of the usual piston-rod-crank kinematic, has permitted to realize low cost and high reliability high pressure reciprocating pumps, called “VR pumps”. Basing on the original know-how developed for the technology, a new invention has been patented, which consists to link a high pressure primary pump, VR type or not, to a second VR pump acted by the pressure of the waste water coming from the desalination plant, instead by pressurized oil as usual. Such second VR pump acts on the desalination circuit like an innovative pressure exchanger.