Fast neutron flux irradiation device to produce radioactive isotopes, such as Tc-99m, for medical use, made by a Deuterium-Tritium (DT) target capable of producing 14 MeV neutrons and by a sample holder arranged around the target in order to intercept the maximum neutron fraction optimizing the activity of the radioisotope produced. 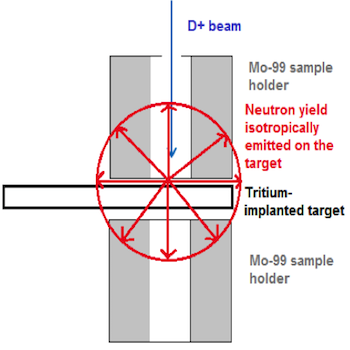 Radioisotopes with a short half-life are used in nuclear medicine combined with vectors of a biological nature to be injected, as radiopharmaceuticals, into patients to perform diagnosis and/or therapy in the fight against tumors. Among these radioisotopes, Technetium-99_metastable, particularly used for tomographic diagnosis (SPECT), plays a particular role. Technetium is made available in hospitals by means of 99Mo / 99mTc generators, where Molybdenum-99 (99Mo) is the precursor from which metastable Technetium is obtained by decay.

ENEA investigated an alternative route to the production of Technetium from nuclear reactors by studying the 100Mo (n, 2n) 99Mo reaction in which 99Mo was produced from 100Mo with neutrons at 14 MeV, obtained from Deuterium (D ) – Tritium (T).

In particular, the innovation of the patent consists in realizing a sample-target suitable for intercepting the largest fraction of neutrons produced and effectively, without being degraded in energy and attenuated in intensity, taking into account the physicalgeometric properties of the distribution in the space of the same neutrons.

Energy and Renewables - Health and Biomedical