EXCIPIENTS FOR DRUGS WITHIN NANOPARTICELLE

A nanoparticle, comprising a block copolymer, which includes a hydrophilic block and a lipophilic block, which can be efficiently loaded with a therapeutic agent, such as trabectedin or paclitaxel, which are well-known anticancer drugs. It also concerns a very simple method of making such a nanoparticle which envisages only the use of conventional syringe and laboratory glassware. 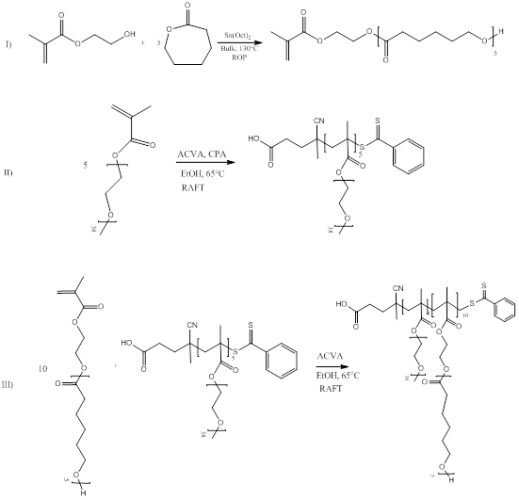 The invention consists of a new class of biocompatible and biodegradable materials for the transport of oligonucleotides based on PCL (polycaprolactones) diacrilates, and their synthesis method. These materials can carry oligonucleotides in the face of a “ring opening polymerization” and a stage polymerization of Michael that allows to obtain poly-b-amino esters (PBAE), the true vectors of the oligonucleotides. These are PBAE, which unlike those produced from bisphenol A diacrylate, are safer for humans. Since the invention is a carrier (vector) of exogenous oligonucleotides, in other words drug delivery, the main application is strictly pharmaceutical in the field of immunotherapies for cancer, apoptosis-associated diseases, vaccines and genetic engineering.