The invention provides an electromagnetic system for independent physical activity of blind or visually-impaired athletes that is efficient, effective, reliable, practical and easy to use.

The system allows the athlete to reach total independence without the need of a driving athlete. It makes it possible for the user to be active independently, be it  running or cycling at higher speeds when compared to a person walking slowly. Moreover it guarantees the safety of the visually-impaired person over a long track that may have to be repeated many times due to competition or training. 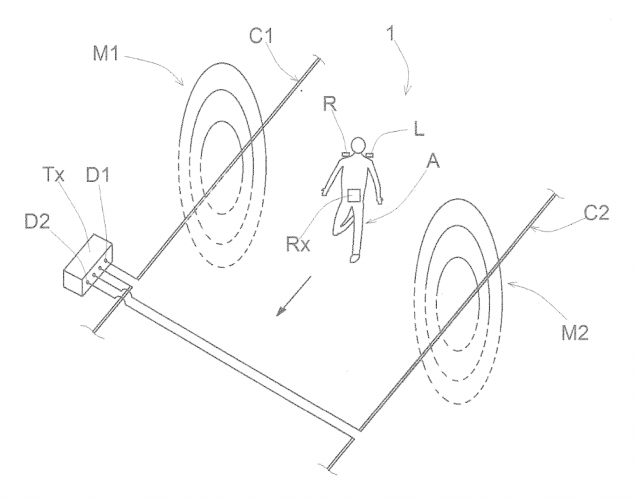 Current mobility aids of visually impaired or blind people detect the presence of objects and / or obstacles in the volume explored by the sensor, but they seem to be still in the experimental phase in order to be used with sufficient reliability and safety in a sports context. This device allows blind athletes to reach independence from a driving athlete during a training session.

The device consists of a fixed transmitting subsystem, consisting of two electrical cables arranged on the sides of a predetermined path, and a receiving subsystem worn by the athlete in belts, caps, jackets, etc., which can embed other sensors such as cardiac or temperature ones. The transmitting system generates two electromagnetic “barriers”: when the athlete approaches one of the two “walls”, which constitute the perimeter of the competition path, the receiving system worn by the athlete signals the proximity of the lane/path limit, allowing to correct the direction and re-enter the central area of the course.