Drug for the prevention of muscle atrophy and cancer cachexia

Cancer cachexia is found in 80% cancer types and is an invalidating syndrome characterized by severe muscle atrophy and drop in body weight. It does not only correlates with the worsening of prognosis and response to anticancer therapies, but is also considered the cause of death from heart or respiratory failure in at least 20% of cancer patients. Despite the high prevalence of the syndrome, there are currently no specific treatments that counteract the onset and progression of the disease. The current invention is based on the repositioning of a drug already used in the clinic, for the prevention of muscle atrophy and neoplastic cachexia. 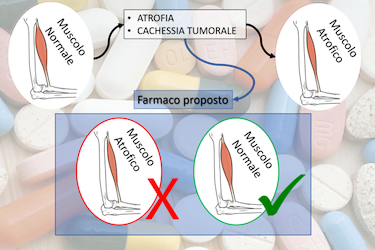 The technology object of the patent is based on the characterization of the pharmacological mechanism of a drug extensively used in the clinic for other applications. By exploiting a different cellular signaling pathway, researchers found that this drug prevents the process of muscle atrophy and cancer cachexia by specifically targeting the muscle loss mechanism. Currently, there are no specific treatments for cachexia, but only palliative care that has not entered the clinical routine due to the low benefits obtained. The novelty of this study lies not only in the discovery of a previously unknown mechanism of the drug, but also in representing a treatment that specifically targets muscle atrophy, also preventing neuromuscular degeneration. The advantage of this study also lie in the possibility of extending the use of this drug for the treatment of types of non-neoplastic muscle atrophies, such as those caused by immobilization (bed rest syndrome) or aging (sarcopenia), or associated with diseases with systemic inflammatory response syndrome (SIRS), such as COVID-19, AIDS, COPD, sepsis and fatty liver.