DNA probe for the detection of pathogens

This invention concerns a nucleotide probe specific for Campylobacter jejuni, C. coli, C. lari and C. upsaliensis which are the main cause of gastroenteritis in humans. In addition, the invention includes its uses and methods for the detection of these microorganisms in food, environmental, medical or veterinary samples. 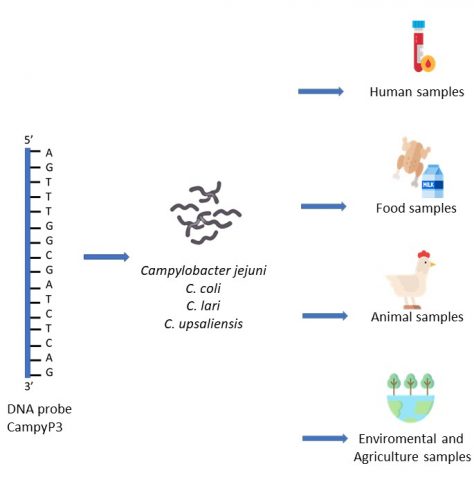 The describes a method for the detection of Campylobacter jejuni, C. coli, C. lari e C. upsaliensis by identifying their DNA via nucleotide probe, named CampyP3. Campylobacter is the third cause of death among the the pathogens related to food contamination. The probe was designed in the sequence of the gene coding for rRNA and it was designed to match with a 100% complementarity the sequence of C. jejuni, C. coli, C. lari e C. upsaliensis. The probe can be applied to various qualitative and quantitative techniques: qPCR, dot blot, Southern blot, FISH, microarray, bioplexing and biosensors (optical, piezoelectrical, electrochemical and transistor).
The probe can be used with labelled or label free biosensors. Test performed with the probe confirmed the specificity of the method using an electrochemical biosensor, dot blot and chemiluminescence.