Rehabilitation therapy of the upper limbs in patients suffering from post-stroke motor disabilities can be performed by a robotic machine to support the work done by the physiotherapist. This portable device is not bulky and light, able to perform three-dimensional movements of the limbs in an interactive way, record and monitor the physical parameters (forces, speed) and biometric of the exercise, modulate the difficulty of the exercise thanks to a special software, keeping concentration high, thus configuring itself as a smart device capable of responding autonomously to the patient’s needs. 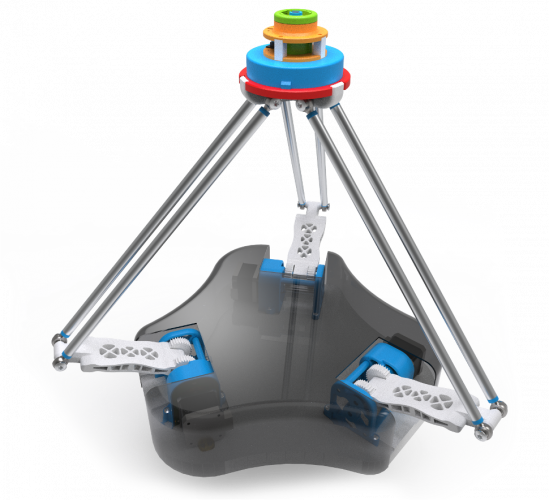 Robots for upper limb rehabilitation therapy in post-stroke patients are characterized by excessive bulk and weight, some of them requiring a fixed installation implying high costs, as well as by a complex construction scheme/difficulty to use. This can impair the exercises prescribed by the specialists. The invention consists of a robot capable of performing a three-dimensional movement of the limbs; a control unit for the management of the electronics (motors and sensors) and a software able to manage the device and the graphic applications for the exercises. The robot has an inverted DELTA architecture, the area in which the limb is placed is sensorized and able to acquire the three-dimensional load impressed by the limb. The patient can perform all movements in the work space, be assisted by the robot in following a trajectory or by performing free movements with lightening of the limb; the robot will record all the physical and biometric parameters, drawing up a virtual medical record and a session score. Despite other systems, using two devices the patient and the therapist will be able to perform a therapy at a distance, each hearing the feedback of the other through the robots.