Device and procedure for the plenoptic acquisition of images

The present invention relates to a technique for the acquisition of plenotic images, called “Correlation Plenoptic Imaging” (CPI). The technique is based on the measurement of the spatio-temporal correlations between the light intensities recorded by two sensors, one used to capture the image of the scene of interest, the other to identify the direction of propagation of light within the same scene. 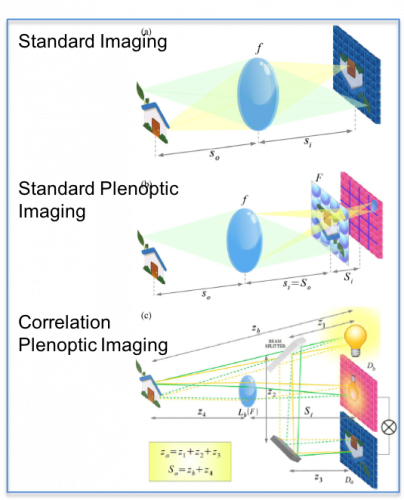 “Correlation Plenoptic Imaging” (CPI) exploits the spatio-temporal quantum correlations inherent in light to achieve plenoctic imaging without sacrificing image resolution. In fact, standard plenoptic imaging requires an array of microlenses to record, on a single sensor, both the image of the scene and the direction of propagation of light; in the CPI, these two information are collected on two disjointed sensors and, therefore, without the use of microlenses. Therefore, CPI shares with standard PI the ability to refocus images, increase depth of field, reconstruct three-dimensional imag, but it maintains resolution at the diffraction limit. In addition, CPI allows for a combination of resolution and depth of field not obtainable with any other imaging system.