The invention deals with ionizing radiation detectors. In particular, it refers to a semiconductor detector provided with micrometric apertures on its surface, such as to favor the passage of laser radiation, necessary for the characterization of the device, without any alteration in the electrical signals transmission inside it. 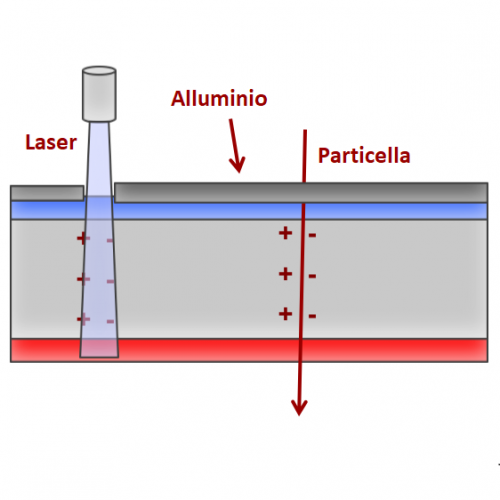 Semiconductor detectors, especially silicon ones, need to be characterized before use. The use of ionizing radiation in this phase involves various difficulties: radioactive sources are not always available, the energy of the emitted radiation may be too low, and the radiation emission from the source is not unidirectional. For these reasons, in the qualification procedures laser signals are often applied, because they can emulate the creation of charges in the detector. However, in order to ensure a good degree of uniformity of the response, the reading electrodes are normally covered by an Aluminum layer which makes them non-sensitive to laser light. This problem has been solved, by the creation of optical windows of suitable dimensions on the metal layer, which allow the passage of the laser signal and at the same time does not alter the detector mode of operation.