Method and a device for plenoptic image acquisition based on the concept of “Correlation Plenoptic Imaging” (CPI, plenoptic imaging with correlation measurements). In addition to providing the normal “photograph” of the scene or three-dimensional sample of interest at the maximum resolution allowed by the optical system, the device collects information on the direction of light propagation, thus allowing to increase the depth of field of the acquired image, to modify the specific plane of focus and reconstruct the 3D image of the scene, in post-processing. This is made possible by the intrinsic correlations in light and by the spatial-temporal correlation measure between two distinct sensors. 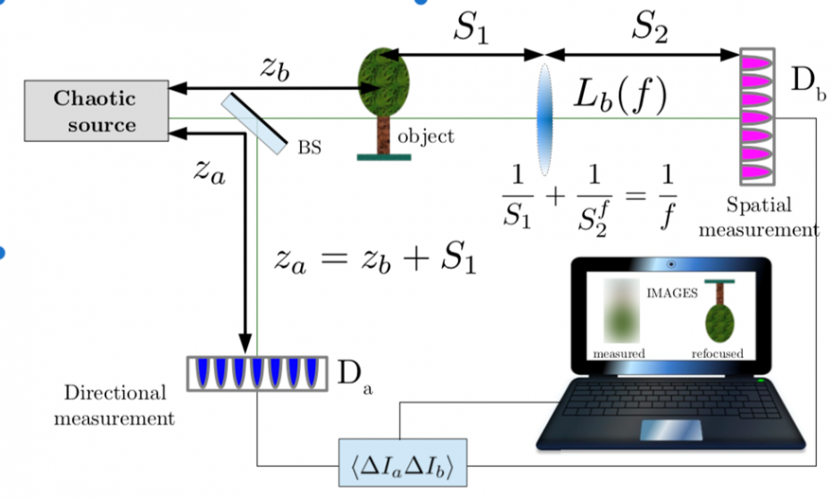 The invention is based on the concept of “Correlation Plenoptic Imaging” (CPI), an imaging modality where light from the source is divided into at least two distinct beams, revealed by two separate sensors: one reproduces the image of the scene of interest whilst the other an image of a plane of interest (source or lens); the correlation measurement between the two sensors allows plenottic information to be obtained, and enables reconstructing three-dimensional images, refocusing blurred photographs,  a posteriori, and increasing the depth of field, while maintaining an unprecedented compromise between resolution and depth of field. Compared to the previously invented and patented CPI devices, this invention allows to perform with the same apparatus both the plenottic image, through the measurement of correlations, and the conventional image of the scene, as would be provided by a conventional imaging device (camera, microscope, etc.).