We present the formulation and production method for obtaining a water-based polymeric paint, which has electrical, piezoresistive, electromagnetic controlled properties, starting from a commercial aqueous-based polymeric paint or from a liquid aqueous based polymeric solution loaded with graphene nanoplatelets (GNP), obtained by exfoliation of expanded graphite. 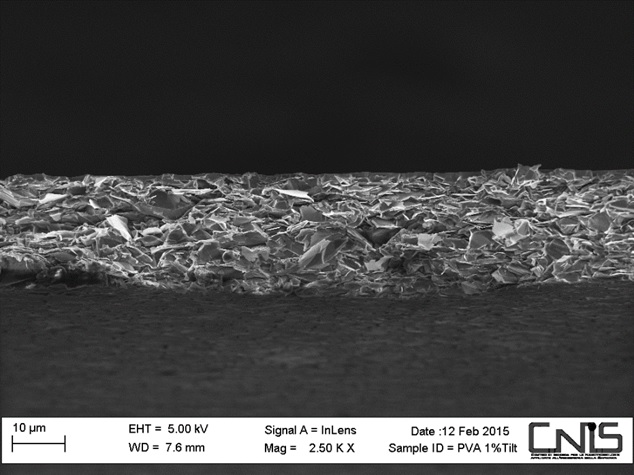 It is possible to produce water-based polymer paints with controlled electrical, piezoresistive, electromagnetic properties. These properties are obtained by modifying commercial paints, through a mechano-chemical process, via the exfoliation of a graphitic precursor and subsequent dispersion of the product (graphene nanoplatelets (GNP)) within the polymer matrix. During this process, alcohol-water mixtures are used in order to facilitate the exfoliation of the graphitic precursor and to help disperse the  GNPs, whilst controlling the viscosity of the product. The paint thus obtained can be easily deposited by spraying or other commonly used techniques. The process presented in this patent is extremely flexible and economical, it allows the use of a graphitic precursor and a mechanical-chemical treatment carried out directly inside the paint, with the aid of a water-alcohol mixture, to provide properties electrical, electromagnetic and electromechanical controlled to any water-based paint, without affecting the native properties of the unmodified paint.